MENUMENU
Join ESC 20
Get Updates
An educated and informed membership makes a strong, powerful union! Stay up to date on the latest news and actions of ESC Local 20 by signing up for ESC Local 20 e-mail updates today! 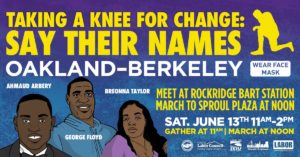 Hosted and organized by SEIU 1021, San Francisco Labor Council, San Mateo Labor Council, Contra Costa Labor Council, and Alameda Labor Council
An action for the unjust murders by Ahmaud Arbery, Breonna Taylor & George Floyd and all at the hands of Police. Taking place Saturday June 13th
Meet at Rockridge Bart station and march to Sproul Plaza
Words by SEIU 1021 President Joseph Bryant
“As a union that unites 60,000 working people across race and other backgrounds and identities, we must continue to actively dismantle structural racism and fight for justice and dignity both in and out of the workplace. The racism that drives calling the police on a bird watcher, a child selling water or a group of people having a bar-b-que at the lake comes from the same racism that can lead to the egregious killings that we have witnessed over the past few weeks. Structural racism manifests itself in all facets and systems of the United States’ society; if we want to build a better and different future for all people, Black, Brown, API and White, it is the duty and responsibility of all Unions and Union members to tenaciously fight for racial and economic justice, as our fates are linked. We are all Sisters, Brothers and Family.

Unfortunately there is no contract available online for the selected employer at this time. Please visit the Salinas Valley Memorial Hospital page for more information.