This month we celebrate Asian-American Heritage Month and recognize the incredible achievements of the thousands of Asian-American members of our Union. 150 years ago, the railroad and farm labor of our ancestors connected the country and fed its citizens. Today, talented and diligent engineers, scientists, healthcare professionals, and legal professionals connect the California power grid, protect the most vulnerable residents, and heal our communities. We are proud of our contributions.

We are also outraged that we are still dealing with the anti-Asian hate that has plagued our nation for 150 years. Our hearts broke when we learned of last month’s killing of Soon Chung Park, 74; Hyun Jung Grant, 51; Suncha Kim, 69; Yong Ae Yue, 63; Delaina Ashley Yaun, 33; Xiaojie Tan, 49; Daoyou Feng, 44; Paul Andre Michels, 54; and Elcias R. Hernandez-Ortiz, 30. We began to fear for our elders and ourselves after learning about the alarming increase this year in the number of anti-Asian hate crimes. In several key cities in California, the number of violent crimes against Asian-Americans has doubled.

As organized labor, we have a particular responsibility to stand up against all forms of racialized hate. Throughout history, Employers and corporate interests have used racism to divide workers from each other: the anti-coolie (coolie was a racial slur directed towards people of Asian descent) clubs of the 1860s, through which white mineworkers whose wages were being cut organized boycotts of Chinese-produced products and lobbied for anti-Chinese laws; the murder of Vincent Chin, assumed to be Japanese, in 1982 by two white laid-off Chrysler workers whose former boss, Lee Iacocca, famously blamed the Japanese auto industry for his own company’s decline; and, the most recent attempt to perpetuate divisiveness, the hateful “Kung Flu” and “China-virus” rhetoric.

As organized labor, we understand the necessity of uniting across racial divides for our mutual benefit. As Asian-Americans, we walk in the footsteps of Phillip Vera Cruz and Larry Itliong, the Filipino farmworker leaders who started the Delano Grape Strike in 1965 before persuading Cesar Chavez, Dolores Huerta, and thousands of Latino farmworkers to join them in the historic 5-year battle to win their contract. We stand in solidarity with the hundreds of Asian-American cooks and housekeepers who joined forces with their Black, white and Latino co-workers to simultaneously strike 26 Marriott hotels and win an enormous victory against the world’s largest hospitality company. We are the Asian-American scientists and engineers of ESC Local 20, united with our co-workers from many backgrounds who stand together in the pursuit of excellent contracts and respect.

For many years, ESC Local 20, IFPTE has been proud to stand with and further the work of the  Asian Pacific American Labor Alliance (APALA), AFL-CIO. For more resources and important tips for addressing anti-Asian racism in your own union, CLC, state federation, and community, please download the Labor Toolkit on Anti-Asian Racism. 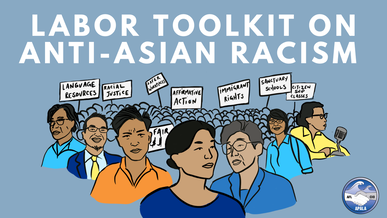 Looking for more? For Asian Pacific American Heritage Month, the AFL-CIO is spotlighting various Asian and Pacific Americans who have worked and continue to work at the intersection of civil and labor rights. Check out AFL-CIO's Profiles in Courage: Celebrating AAPI Labor Activists.

Unfortunately there is no contract available online for the selected employer at this time. Please visit the Federal Defenders of San Diego, Inc. page for more information.

Unfortunately there is no contract available online for the selected employer at this time. Please visit the Homeless Action Center page for more information.

Unfortunately there is no contract available online for the selected employer at this time. Please visit the Disability Rights Advocates page for more information.